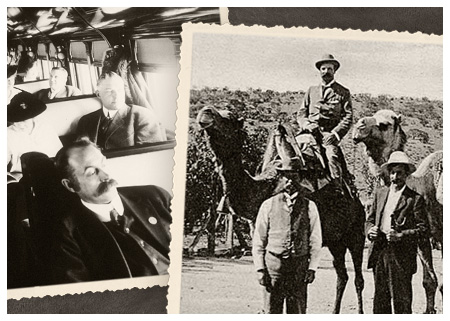 CECIL SHAMUS FITZGERALD had a passion for life, he travelled the world in search of adventure and intrigue. His excursions took him far from his native Ireland Though travel he did his Irish charm and ﬁery personality were ever present till the moment of his last breath.

Until recently, Cecil Shamus Fitzgerald’s descendants believed Cecil’s brew notes had been destroyed in the ﬁre. While undertaking a renovation, of little used space, a glass container wrapped in oil cloth and sealed with wax was found entombed in a metal deeds box. The contents of the container revealed the old brew master notes long feared lost.

So we now enjoy Cecil’s ﬁnest on tap alongside his signature recipes from long ago adventures and the Cecil’s story continues, yet again. As Cecil always said, “I truly hope you enjoy it, it was not easy to come by.”

Cecil transplanted himself from Ireland around the turn of the century. He started to earn money by working on the Canadian railroad by day, and dominating the bare-knuckle boxing circuit by night.

After a few months he saved enough money to build a bar, and acted as its bartender, cook, bouncer, and live entertainment. On every second Tuesday, he would charge a nickel's admission to watch him wrestle a bear, before retiring with a record of 47-2.

Once his bear-wrestling shorts were retired, he decided to set out on a pilgrimage to find the world's best beer for his beloved tavern. His travels have seen him land in all the corners of the globe, with Cecil sending home cases of the ales he's sampled along the way.